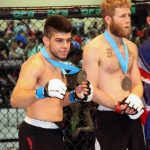 On January 11 AXS unveiled the launch of “Friday Night Fights” for 2019, beginning on Jan.18. with a four and a half hour broadcasting slot of original MMA and pro wrestling, the former being provided by standout professional MMA organization, Legacy Fighting Alliance (LFA).

“Legacy Fighting Alliance is the number one MMA promotion in the world for cultivating talent and delivering on the promise of watching tomorrow’s champions today. In the last two years, LFA has sent over 50 fighters to the UFC and we expect to create more legendary champions inside the octagon on AXS TV in 2019.”

Before making his professional transition, Mariscal remained undefeated as an amateur MMA contender with a run that culminated in being crowned amateur world champion at the inaugural IMMAF World Amateur Championships in Las Vegas.

Competing in the men’s lightweight division, the now 26-year-old Mariscal secured gold for Team USA with four triumphs across five days in the 155lb bracket, besting standout opposition from Romania, Poland, the UK and Sweden, all via first round stoppages.

Since Mariscal featured in the pioneering first IMMAF World Championships, the premier proving ground for amateur mixed martial artists has continued its rapid evolution, with leading safety standards and enhanced competition gear such as amateur size gloves and shin guards developed by Green Hill, in addition to the ever increasing depth of global talent.

This article first appeared on IMMAF.org